Why She Buys: A Must Read for All Marketers 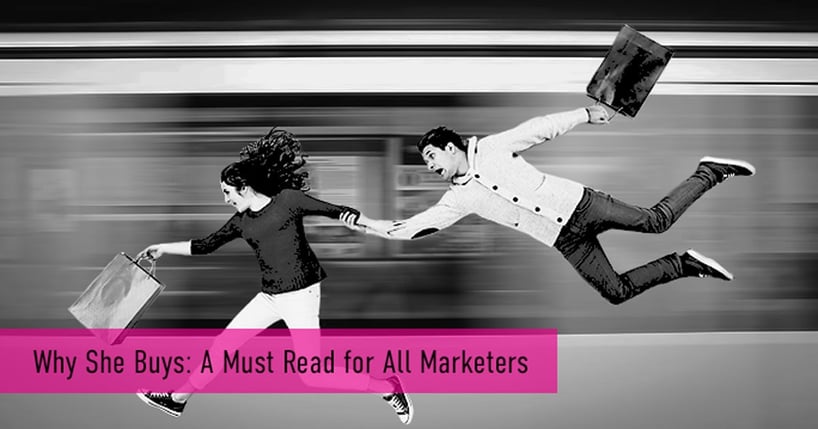 Approximately 80% of everything people buy is, in some way, influenced by women. This is the thought of Bridget Brennan, author of the well renowned novel Why She Buys: The New Strategy for Reaching the World's Most Powerful Consumers. I read this book recently, after hearing about it from a friend who not only had the pleasure of attending a reading by Brennan, but then also running into her while eating dinner later in the day. They proceeded to chat for over an hour about all things important—the economy, women in business, and, of course, the wonderful world of marketing. So naturally, I was interested in Brennan’s book right off the bat. And for good reason. Brennan's book throws the idea of men in the marketplace on its head, and—quite refreshingly—explains that women are, in fact, the ultimate buyers of the century. So why do we act like they aren't as influential as they are? Some of us have been working to break that notion for a long time. But no one has done so to the extent that Brennan has. In this blog, we'll talk all things marketing through the eyes of this brilliant human *woman*. Get excited.

Marketing According to Brennan

We lie to ourselves when we think about marketing. Brennan asserts this throughout her book, but opens with the idea right from the get go. Why? Because it's so important to remember while reading, and when applying all of this stellar information to your real life and business. Most of these lies, she reminds us, are born out of honest ignorance to the truth. That is to say that we're not trying to play with our understanding of one thing or the other, really. Rather, we truly, genuinely believe that ‘this’ is the way it is. Take women in marketing for instance. When we think about women in marketing… well, we don’t. Not really, anyway. The advertising world in general has been portrayed as a man’s game, à la Mad Men. And while that portrayal was largely true back in the day, it's not anymore—not at all. And yet, we still often think of Don Draper when we think of advertising, marketing—that whole idea—instead of women in the very same profession. Brennan’s goal is to make her readers realize that if we cognizantly recognize this fact—that women are at the forefront (in many cases) of this whole marketing world we've got spinning on its axis—we'll actually be better business people, and all together more successful. Even more than that, it must be noted that this notion extends far past just women in marketing (more on that later). And well, who doesn't want that?

Okay, yes, we've gotten a flood of books in the past five or so years that preach understanding 'women's place in the marketplace' as crucial. But what most books don't address is the most important part of this whole puzzle: recognizing that women in marketing aren't just sitting behind desks—they're at the forefront of all the craziness. They're the mothers and sisters and daughters of each of us, pushing forward in the 'good fight', as it were. In much the same way that Brennan imparts unto her readers not only the ramifications of a world without women in marketing, she also makes known the immense opportunities presented by these very same people.

Anyway, back to the nitty gritty. Half way through Brennan's book, which is chock-full of research and sparkly (and true) notions on women (yay!), you'll find what we’ve deemed the realest chapters she has to offer. Many of you are probably thinking that as a woman, or as a man that knows women well, you don't need this book. Well, I’ll tell you what: as a woman, I thought that might have been the case for myself as well... but then I got to this point in Brennan’s work. And yes, I was dedicated to reading it through and through even before this point, but—man, did this change my perspective. Brennan spills all the beans on practical strategies for attracting a women-audience, all the while offering a woman's perspective and why implementing the way she suggests (we can't give it all away, you will have to read some of the book for yourself) is so important.

Brennan goes into painstakingly specific detail in those aforementioned hard-to-digest moments. I loved this about the book at large. She takes her time crunching through every hard-fought fact, explaining why she sees things the way she does, providing research and real-life instances at every turn. At one point, Brennan dissects, category by category, the real, tangible influence women have over purchase decisions, big and small. And she doesn't go through just the easy examples. She pulls out all the stops, even going as far as explaining that 40% of 'gamers' are made up by women (at least, she says, according to the Electronic Software Association.). Yes, you read that right: 40%. But my very favorite part of this book, and what will likely be yours, too, if you’re invested in learning all the good stuff about marketing, doesn’t come until about half way through. That said, you’ll have to be patient reading this one—there are a number of paradigm shifts throughout, and though Brennan’s quick wit and awesome sense of humor will keep you entertained, there’s still a lot to digest.

Women Vs. Men in Marketing (and Beyond)

One of Brennan's biggest and best assertions I gathered from her book was this (and yes, it was very, very difficult to decide on just one thing alone): women are different from men. This is fact. And while the two sexes are inextricably linked, they are equally, if not even more different. Brennan explains, “Every marketer knows that the most effective campaigns create an emotional connection with audiences. But what if one audience has an entirely different emotional reality than the other?” And she’s right; everything about women versus men makes us wired contrarily, and therefore, we respond differently to just about whatever the world throws at us—this becomes especially true when decision making on why, and how we buy get involved.

Imagine trying to create a marketing campaign around the above principle—accounting for both men and women, what they want, versus the intersections of what will ultimately appeal to them? It's almost an impossible feat to achieve. But Brennan takes on the challenge, discussing why certain language, visuals, and anything else you could possibly think of, can be applied to “marketing to men” versus “marketing to women.” It’s a fascinating concept, and one not readily understood—er, understood at all, I guess—in the grand scheme of things. Brennan certainly taught me that. Her “What’s Hot and What’s Not: It’s Different for Women” changed the way I see creating personas in my own Inbound Marketing pursuits. As if this task didn’t require specific enough reasoning per each persona, I’ve also started to consider the very different, tangible responses to marketing women and men have. This may sound like a lot to consider when just cracking open a book… but the human experience is a wild one, and Brennan’s study on it is more far reaching than any I’ve ever encountered.

I've read a lot of marketing books since getting deep into this field, but not a single one compares to Why She Buys. Brennan's ability to observe, dissect, and ultimately, come to readily understandable and even at times, fun conclusions about this messy marketing world, is bar none. And it’s not just her book that has a ton to teach. As a follow up to my reading Why She Buys, I simply typed ‘Bridget Brennan’ into Google. An article she wrote for Forbes on women's impact on consumer business came up. I wasn't expecting much, mostly because her book was so magnificent I thought I had read the peak of Brennan, but, rather unsurprisingly, I guess—she proved me wrong again. In her article entitled “The Growth of Women in the Workforce and How Retailers Can Respond”, she starts: “Today we’re looking at a global shift I call the ‘mother of all trends’… there are more women in the paid labor force than at any other time in history. If you’re in retail, this is the trend that drives just about everything else, and something you should be monitoring closely." This idea is only a snippet of the type of insightful information you can find in Why She Buys. But it just goes to show that this is someone whose ideas are so profound, so 'bottom line,' that you absolutely will not regret sitting down, putting in the time, and reading up her thoughts.