Why Productive Meditation Should Be on Your To-Do List 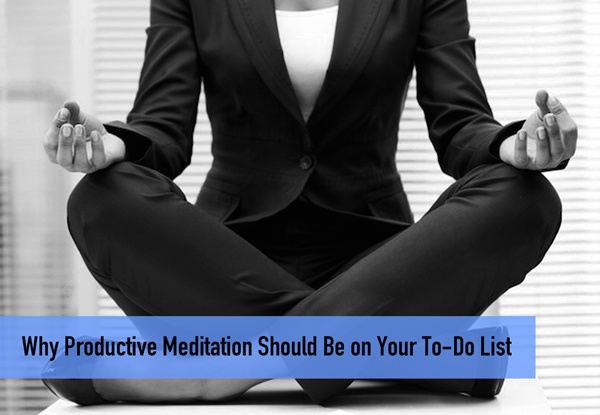 Productive meditation, as described by author Cal Newport in his compelling Deep Work, is exactly what it sounds like. During productive meditation, one takes a period of time during which they’re doing something else physically (walking, running, biking, driving, showering even), and focuses on one particular, well-defined problem. The goal? Well, that part is particularly simple: to solve said problem.

Newport recalls a series of his own initial experiences with productive meditation, which he practiced during his walks to and from work. What did these productive meditations do for him? They worked out the chapter outlines for one of his books! And while not all of us will be pro-productive meditators right off the bat like Newport, this idea is a key concept to professional success. And in our crazy world of social media updates, emails, and other distractions galore, the marketing world is especially bombarded with distractions during this digital age. It’s the way of our world, and the way of our industry. But there are a few ways we can combat it… lets dive in.

In his chapter on productive meditation, Newport encourages the reader to partake in these types of contemplative sessions. And we encourage you to do so, too. Even as I’m writing this, I’m remembering one of the first times I actively took part in productive meditation. It was on my drive to work, and my issue to resolve was simple: how was I going to plan my next six blogs? Instead of getting anxious or stressed about what was to come once I arrived at the office, I put the otherwise wasted time to work and came up with a plan—a very distinct outline compartmentalized in my very own brain. Sounds simple enough, right? Well, sort of. More on that soon.

I’ve also started incorporating walks into my workday—another Newport suggestion. Whether I’m in the office or working from home, I’ve found that my sessions of productive meditation increase my professional productivity, as opposed to taking time away from it. Win-win.

Interestingly enough, and despite its name, productive meditation isn’t just meant to up-productivity. Rather, the practice is defined by its ability to “rapidly improve your ability to think deeply”. It’s only by forcing yourself to resist those pesky distractions and actively returning to that well-defined problem we talked about earlier that we’re able to focus deeper and really, really concentrate. How to do this? Newport, of course, comes through for us with a few suggestions.

What in the world does this mean? Well, when it comes to productive meditation, or any type of mediation for that matter, getting good is going to take practice. The first few times around (or about ten times, if you’re like me), will be frustrating, and if you’re in touch with your consciousness, you’re likely to notice yourself drifting away from that well-defined issue we talked about. I experienced this a number of times before that car ride I told you about. I’d tried practicing productive meditation while walking my dog—while jogging—while on an hour and a half long bike ride during which I attempted multiple times. All were relative disappointments. But then that car ride happened. Practice, practice, practice.

Looping (going over what you already know about your problem instead of challenging yourself to explore new depths), Newport suggests, also gets in the way when it comes to meditation, especially that of the productive genre. But fear not; as soon as you notice yourself looping, just pause, take a second, and get back to what you know is on the agenda.

This one requires a bit less explanation, but it’s equally important. Start with the relevant variables apart of your problem, the author tells us. Once those are defined, move onto the following step: what’s the next question I need to answer, now that I have these variables? It’s a lot of question-asking, we know. But each one of them plays a different, however significant role in targeting your attention and ultimately aiding in bringing you to the answer to your issue.

Reviewing and restoring variables that are part of your greater issue is imperative for tackling this “next-step” question. It’s all a part of the plan to help you think deeper, and—as an added bonus—become more productive.

Unconscious thought theory (UTT) works alongside productive meditation, and is believed by Newport to be equally as important in the grand scheme of things. The idea first came to light thanks to the Dutch psychologist Ap Dijksterhuis and his team. Dijksterhuis describes this phenomenon as “an attempt to understand the different roles conscious and unconscious deliberation play in decision making.” That is to say, for instance, that while our conscious mind may be trying to work out a math problem, focusing on the particular numbers involved, our unconscious mind is deciding on the steps necessary to carry out the calculation.

This theory really isn’t much different from how we perform tasks inside the world of Inbound Marketing. Each client presents a different set of issues and desires (the numbers in our math problem), and how we go about simplifying and solving said problem serve as the inner-workings of the Inbound Methodology (steps towards the calculation). Almost exactly opposite that of productive meditation, however, UTT utilizes the unconscious, almost oblivious mind. So, while your conscious mind takes a breather (say, after you’ve been doing some productive meditation), working out the kinks of your client’s needs, the unconscious mind buzzes, readying itself to take flight and shift through the complex challenges ahead.

Newport encourages his readers to work through UTT. Sound counterintuitive? It kind of is, but by recognizing when your brain is in overload, you also have the opportunity to give yourself the time it needs to recuperate. Then, when it’s time to back to work, you’ll know.

Productive meditation and UTT are two different peas in a pod—they work together, but aim to serve different ends. While productive meditation takes time, effort, lots of practice, and perhaps most importantly, patience, UTT comes more naturally, with the conscious side of things following the rules per usual, and the unconscious working its way through the tough stuff. But whether you’re taking a closer look at UTT, or trying your hand at productive meditation, it’s essential not to get frustrated during the process… you’re doing the best you can in both realms, all while thinking deeply. And that’s more than most can say.

Let us know what you think of this piece, especially if you’ve read Deep Work. We’ll have more in store for you from Newport’s seminal piece in the coming weeks, so come back soon!

Are you a leader, marketer or content creator? Uncover the secret to truly influential stories. Discover Primal Storytelling™.