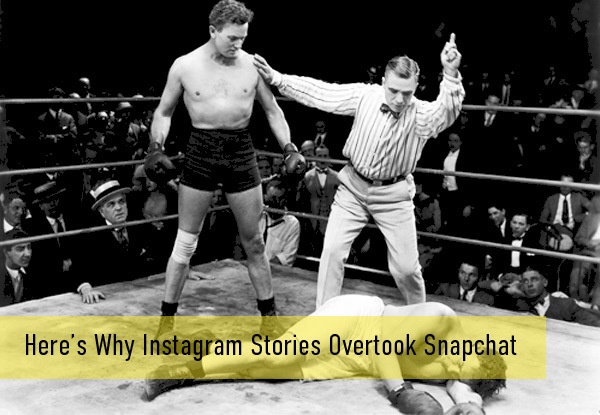 Instagram, as much gripe as we gave them at the start, has officially overtaken Snapchat in the realm of social media photo and video updates, especially when it comes to Stories. In case you hadn’t heard of either of these apps’ storytelling features, it goes like this: both Snapchat and now Instagram allow users to create compilations of photos and videos that disappear after 24 hours. And because everything on social comes down to who’s doing what best, we may as well come right out with it: Instagram seems to be winning this rat race.

We know, we know—how could this happen?! Well, it didn’t take long, and it’s certainly the truth of the matter as we speak. Now, of course, could it have something to do with the sheer number of users on Instagram, as well as the types of users on each platform—both things certainly contribute. Here's the scoop.

Mark Zuckerberg: That is All

Facebook CEO, Mark Zuckerberg, announced some very exciting news during his company’s fourth-quarter earnings back in the beginning of this year. Facebook acquired Instagram for $1 billion in 2012… and on February 1st, we learned that Instagram had acquired a massive, and wildly impressive increase in daily users. Instagram has officially grown to 400 million daily active users—that's an upsurge of 100 million new daily users in the incredibly short time span of seven months. Even when we last reported on this daily user number, Instagram nearly doubled the user interface number of Snapchat, who boasts a "mere" 158 million. Now at double that number and then some, Instagram doesn’t show any signs of slowing down its takeover.

When they introduced Stories, Instagram kept the design and operator elements incredibly unpretentious. The overall scheme for Stories worked with their app at large, and the addition of Stories (even though we couldn’t quite see this, and certainly didn’t believe it at the time of inception) did just that—added to the app—rather than distracting or taking away from it.

Facebook COO Sheryl Sandberg has described the induction of Instagram Stories as a “standout example” in product innovation. In January of this year, Stories had already boasted 150 million daily views... which is just 8 million short of Snapchat's daily user total.

While maintaining an easy user interface, Instagram also does a stellar job at presenting an image of whatever we’re looking at through very distinctly rose-colored glasses. And who doesn’t like that, really, when it comes to visual content? Meanwhile, Snapchat has proven itself to be more of a goofy platform for visual content. "Younger users are drawn to it for the same reason older people were perplexed by it," the Daily Dot explains. "Snapchat is impulsive, it’s goofy, it allows its users to leave impressions that don’t last more than a few seconds and at most, a single day. Instagram serving up Stories to its users means a larger and broader audience will be able to experiment with a Snapchat-like feature for the first time."

Instagram Stories don't have cute dog filters, or funny, vomiting rainbows. It's uniquely more adult in comparison to Snapchat. Users also don't get notifications when a viewer screenshots their content (unlike Snapchat), and Stories can be paused by holding a finger down on-screen. It's much less protective, which, in a way, seems to encourage a much more respectful and mature usage pattern... which is nothing we're against, that's for certain.

We Were All Wrong

Yes, we gave Instagram flack when they started using Stories. And yes, so did the rest of the social media world. But we’re not afraid to admit when we’re wrong—especially not when it comes to something as cool and innovative as the changes being made on social. Instagram did it right when they copied Snapchat (it’s just the truth, and Instagram CEO Kevin Systrom admitted it here, without the blink of an eye, or blushed cheek). It’s the name of the game in this competitive world, upping one another. And Instagram certainly won this round.

What do you think? Are you using one platform over the other? And better yet, if you use both do you keep your Instagram and Snapchat personalities separate? We love hearing from you, so give us a shout.