Who Was Hodor? A Game of Thrones: Fan Theory Edition 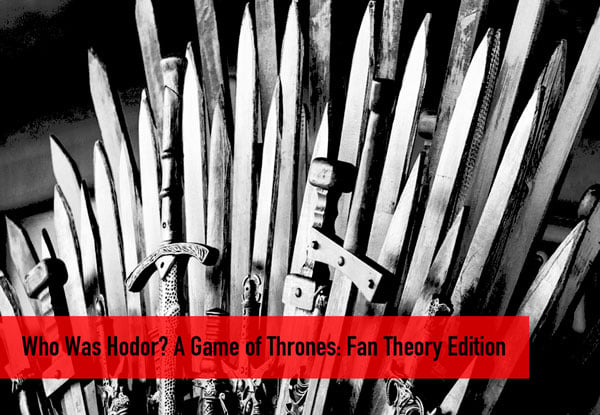 First things first: SPOILER ALERT. If you are not up to speed with Game of Thrones—i.e. on Season 6, having watched Episode 2—do not continue reading! (But share this piece with people you do know are up to date with GoT, of course). Now that that's out of the way, we want to discuss the biggest thing on television since—er, ever? George R.R. Martin, the best-selling American novelist whose series "A Song of Ice and Fire" was brought to life via HBO as "Game of Thrones," is now in its 6th season—and it's crazier than ever. When the show originally aired in 2011, it had a decently sized following—but being available only on HBO hurt the show's viewing numbers—however, not its ratings. Since day one, GoT as been at the top of the charts in terms of viewer satisfaction. And when that happens with a TV show or movie, something else does, too: it becomes all people talk about. Six seasons in, and the success associated with GoT has never been greater.

Before we get into the fan-theory surrounding one of Game of Thrones’ most recent critical scenes and characters, let’s talk first about the bare bones of this moment during last week’s episode: While in the Cave of his essential advisor, the three-eyed raven, Bran has a vision. Bran, as you well know if you watch GoT, is a warg—a human capable of perceiving the world through the thoughts and senses of an animal. He sees a young Hodor, named Wylis at the time—a boy who can speak in full, comprehensive sentences, and who is a well-liked stable hand. In his vision, Bran sees Hodor with Lyanna and Ned Stark. When Bran comes out of his vision, he tries to get Hodor to repeat his given name, but the gentle giant is at a loss; he cannot.

So, after that episode aired, the Internet blew up. People were going as theory-crazy as when Jon Snow died, speculating from bottom to top all about Hodor's origin. I mean, we have all been wondering where he came from and what happened to him for six seasons now. The theory, first introduced to the ever-mighty inter-web by a user named TazoGreenTea on Reddit, and discussed even more in depth by Gbinasia, is as follows: Hodor was at one point a warg who remained in his transformed state too long. As such, he lost all cognitive abilities (along with likely a slew of others things).

All right, we can see how that’d be a legitimate theory (though it’s not the only one…). Now let’s rewind a bit.

Moving on. The next question is: if Hodor were a warg, what would he have chosen to change into? Well, to some GoT fans, that was obvious: Lyanna Stark’s horse, of course! As a stable hand, Hodor—then Wylis—knows how well the horses are treated, and how much attention they get. Specifically, if Wylis was to warg into Lyanna’s horse, he’d be getting attention from Lyanna herself (Bran’s flashback reveals that the young Wylis might have had a crush on Lyanna). The docile nature of horses would explain why Hodor ended up the way he did—though the simpleton factor, we’re still not totally sure adds up, since horses are highly intelligent creatures. Onward.

Alternatively, it is also possible that when Wylis was warging into a horse, the horse was killed. That would explain why Wylis, now Hodor, hates violence so much. A lot of people are speculating negatively, saying this is all too crazy to be true. But a while back, the Huffington Post asked George R.R. Martin what Hodor meant, and what his background is, but the author wouldn't give an answer. So, as far as we can tell, it’s truly anyone's guess where this big guy comes from. We happen to think that this theory makes a whole lot of sense… in fact, maybe too much sense for it to be wrong.

What do you think? What happened to Wylis all those years ago? There’s a great deal that needs to be answered in this season—and a lot of it doesn’t have to do anything with Hodor. That said: don’t hold your breath waiting to find out why Bran had that vision. Who knows, we might not get any further information about all of this for a few more seasons… but for all of our sanity, let’s hope that’s not the case.