Using Celebrity News to Boost Traffic For Your Blog 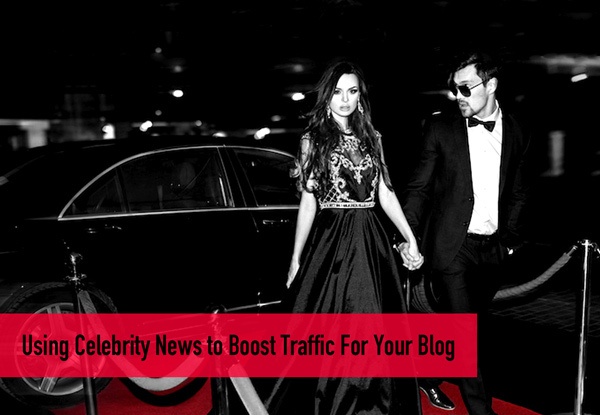 The word "bait" might come to mind when one considers writing celebrities and their most recent goings-on into a blog post. And while I get that—I do, I really do—try not to think of it in such a negative light. The power of celebrity is something we could all use (in more ways than one, for certain), but for now, let’s talk about it under the guise of gaining readership.

Talking about celebrities, and writing them into your blog is just another incredibly smart way to garner traffic. As humans, we can be relatively shallow—admit it! It’s just the cold, hard truth. That said, it makes sense that the hardest part about writing content is writing a headline interesting enough to get people to want to read it. The second hardest part, then, especially when writing about a well-known or popular subject, is getting people to want to read all the way through your article and take something away from it. It's not always the case that we're super interested in learning about the ‘3 Best Ways to Market This Year!’ and we’re probably even less interested when we finally click to read it and it’s long, bland paragraphs with a bunch of industry jargon... But, when you bring Beyoncé into the mix, suddenly, we're a little bit more interested, and certainly a lot more entertained.

For example, take a recent piece we wrote about The Queen and her newest album. In The Brilliant Marketing Strategy Behind Beyoncé’s Lemonade, we talk all about Beyoncé’s team’s marketing tactics—sure. But we also talk a whole lot about the album itself. And really, that’s what piques readers’ interest. The more benign (however noteworthy and interesting to us!) stuff often takes a backseat to what we have to say about Bey, and the questions we posed for our readers (Are Jay Z and Beyoncé really splitting up? Did he cheat on her? What's with that last video wherein Jay Z and Blue Ivy make cameos?) Over the course of that article, we not only get to the crux of all these questions, but we also explain exactly how and why Beyoncé reigns supreme over the marketing world. Hopefully, while people were reading through, they were also thinking about how they can apply Beyoncé marketing methods in their own business.

Similarly, but on a much sadder note, we also wrote about the death of Prince. We all knew Prince as the incredibly talented dancer, singer, and overall flamboyant performer. But what many people didn't know about the funk, pop, R&B, and rock icon (yep, he was all of those things), is just what a perfect mix of hilarious and compassionate he was. So, how did we take such a sad topic and turn it on its head? Well, we wrote about The 6 Tweets that Show Us @Prince Was As Funny As He Was Caring.

In the immediate aftermath of his untimely death, everyone was searching for little, however meaningful remarks on the wonderful man that was The Artist Formerly Known as Prince. He had an enormous effect on so many generations of music-lovers, and it seemed that following his death, people wanted something to both laugh and cry about. So we gave them both. The piece shows that Prince wasn't just a performer--he was a fun-loving, caring, sweet soul whose sentiments—not just his music—would be greatly missed. And maybe somewhere in their greater subconscious (or conscious, even), people were taking note at how to better show their personality over Twitter, just like ‘TAFKAP’.

Using celebrities to boost your readership isn’t shallow; it’s smart, and we should all be doing more of it. The power of celebrity is no joke, and as much as many of us would like to believe that we’re immune to the powers that be (read: what’s going on in the life of Kanye? Is Taylor Swift still dating [fill in the blank])—the list goes on and on; again, we’re only human, and sometimes we just can’t help ourselves. So use all of that to your advantage. People are interested in ‘the ways the other half lives,’ or, in the case of Beyoncé and Prince, what it is they are/were doing behind the scenes. As far as Beyoncé goes—we may never know. She’s a mastermind and a genius in her own right—that much simply can’t be denied. And for Prince: well, during an incredibly sad time, he still managed to elicit wide smiles and exhalations of benevolence from us. What’s better than that?

So: get researching the hottest celebrity news, find a clever way to work some of it into your blog, and roll with it!