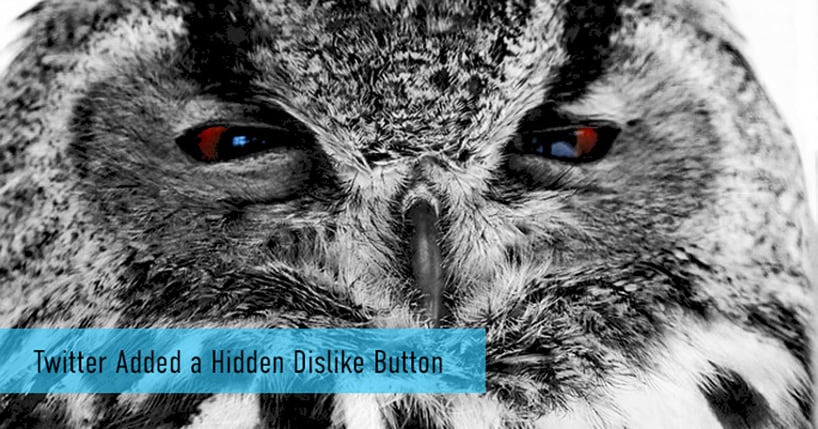 We've written about Twitter before in various capacities: "here's how you use it," "here's why you should use it," "here's why you shouldn't", and pretty much any other variation of those ideas. But recently, people started talking about something very odd on Twitter. Something most people—including us—hadn't noticed. Drum roll please: Twitter has an "I don’t like this tweet” button.

You might be asking yourself “why is the fact that Twitter gives people the chance to ‘dislike’ something so important?” Well, on the surface, it’s not. But dig a little deeper, and you’ll see: this is big news.

Perhaps the biggest reason people didn’t notice the addition to Twitter was because they’ve been unfollowing those they disagree with since the social platform came into existence many years ago. Or, they’ve resorted to the more overt “blocking” method, in which case not only do you not have to see that person’s tweets, but they can never see yours either (basically the equivalent of saying: ha! So there). Twitter also allows users to “mute” people, which is cool and all, but doesn’t say much in the form of communicating online… and that’s what social media is all about, right? So why are executives over at Twitter adding a feature that seems to serve a similar purpose as the blocking and mute features? What’s the point, really? They could have released an actual dislike button--something more straightforward--had they really wanted to please users. We think they made this move for a number of reasons. Let’s get into it.

Facebook integrated an “emotions” option for users a while back so that they could react to posts—be they happy, sad, or something in-between, Facebook realized that people simply having the capacity to like something just wasn’t enough anymore. They needed a heightened mode of communication… a reaction button. And, voila.

So, back to the big deal over on Twitter. Under the drop-down menu available on most tweets—right between the "Copy link to Tweet" and "Unfollow" options is the new "I don't like this tweet" alternative. In sum, Twitter just introduced what is basically a dislike button. This is something that Facebook has been fighting against for many years (users originally all but demanded a dislike option when liking came into the forefront). And well, we tend to air on the side of Twitter with this one—if there's a like button, there ought to be an essential dislike button, too (it doesn’t actually have the word “dislike” in it, but the option suggests that, without a doubt). The addition, we think, only seems fair. No one knows exactly when Twitter introduced this option, though MacRumors reported on it back in September of 2016, before had even really noticed it, never mind cared all too much. Oh, and there's another thing: Twitter doesn't show this option on every single tweet. That's right. So this means that somehow, those brilliant nerds over at Twitter have created an algorithm that allows them to watch what you're tweeting about. It’s up to them, then, to decide whether or not a post might be controversial enough for the additional "I don't like this tweet" option to appear.

So what happens when you try to dislike a tweet? Not much. I tried it (mind you, I had to fan through exactly 9 tweets—no more, no less—on my newsfeed before I came across one that gave me the option to dislike), and Twitter responded: “Thanks. Twitter will use this to make your timeline better”. I’m still deciding how I feel about this reaction from the social media platform… one I’ve been using on and off since 2009. I’m pretty sure, though, that I’m not wild about it. It’s one thing to give me the option to dislike something. But if I go onto a social media platform, I want to get the larger scope of things happening around me. And yes, that scope is mostly including just those I follow and people like them under the “suggested” option, but really—what is it about social media these days that makes the executives at Facebook, Instagram, and Twitter believe that we should live in a perfect little social media bubble, filled only with those things that keep us feeling at ease? Isn’t the Internet all about the potential to feel, for lack of a better phrase and congruence, ill-at-ease?

Take the United airlines disaster from the other day (we wrote all about it, and you can check it out here). The likelihood that that automatically came up on people's feeds is high. Why? Because it was trending all over social media in what was basically a matter of minutes. But think about it this way: what if you'd previously "disliked" a post on Twitter by United, and the platform then got rid of all United-related tweets henceforward? You would have been totally out of the loop on that social platform. Doesn’t seem quite right, does it?

The way we see it, yes, it’s important to let social media users express themselves online. And this “I don’t like this Tweet” option certainly provides that. But perhaps Twitter—and other sites, too—have gone too far. What if they’re watching us so closely that they’re actually taking away from our user experience? Their honing skills are impressive. We’ll give them that. But all this really tells us is that Twitter’s coders have gotten better—that they’ve decided to watch us even more closely than before. Which, in turn, means they’re curating most aspects of our experience online. And, well, we’re just not so sure how we feel about that.