The Power of Many: Social Media's Role in the EpiPen Debacle 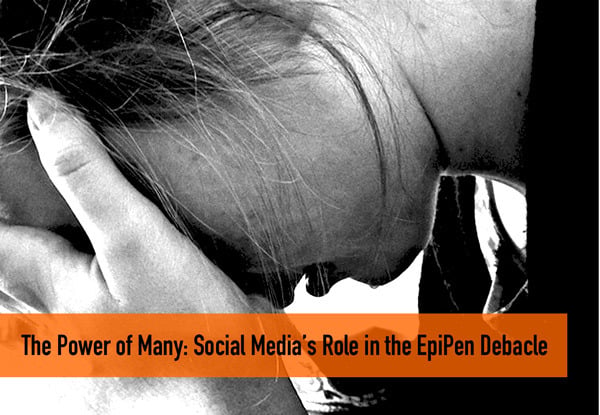 In this day and age, half the battle of marketing effectively is social media. The question is no longer if you partake in platforms like Twitter, Facebook and the like; rather, the question is how well do you do it? After a massive online backlash regarding the seemingly ever-heightening cost of Mylan Pharmaceuticals’ EpiPens, it was the social media crusaders of the universe who sparked a change in the company's price policy.

I am a marketer, as well as someone who has suffered from a life-long peanut allergy. That said, I am well acquainted with EpiPens, and was following this battle closely through the means of Facebook statuses and informative tweets, for the most part. Just last month, Mylan, EpiPen's producer since 2007, finally agreed to work towards reducing the cost of their life-saving drug. Mashable reported that the company is creating a savings card for EpiPen 2-Paks, the standard form by which users generally receive their EpiPens—this will cover "up to $300 of the $609 cost (which is up from less than $100 in 2007)." Sure, if you don't have insurance, you're not covered, and you'll be paying the astronomical price for Mylan's miracle drug. Or, worse, you'll go without it. And as much as that is the point, it’s not. Here’s the breakdown of how social media just came in oh-so clutch for people, like me, who need EpiPens. It happened just a few weeks ago, and as silly as it may sound: social media, I cannot thank you enough.

Mylan is at the epicenter of the EpiPen and its users. Since acquiring the drug in 2007, the company has increased the price of its life-saving allergy medication and device by 471%. Mylan has a monopoly on EpiPen; this particular lack of competition surrounding the drug has allowed the company to control the fate of allergy-ridden customers for decades, and while their prices were largely "doable" for a while, as aforementioned, that recently came to a screeching halt.

Social platforms like Twitter and Facebook are there for us when we want to speak out--reach our friends, or even the public at large. The latter, however, allows for a much greater character count when it comes to ranting. As such, angry EpiPen customers took to the streets of Facebook in particular, as it were, to express their discontent.

When this all came to pass, I read a Mashable article that reported on Facebook-Mom extraordinaire, Robyn O'Brien, who has a following that now reaches past 117,000 people. She wrote: "This mom just shared that she had to pay $730 & wept at the pharmacy counter, because she can’t afford another one. Another shared that she felt like a ‘horrible mom’ because she could only afford one. This is #epigate. Lives are at risk" Epigate. How incredibly clever, and as it turns out, effective. Thousands responded to the post and created their own, hashtagging the same simple word, and sharing their personal stories—often times, with photos of shocking EpiPen receipts included. Some anecdotes weren’t entirely negative, from people like me whose insurance is quite good, and has done a decent job at subsidizing the astronomical costs—but others came from the likes of those whose children had lost their lives to their life-threatening allergies—people like O’Brien herself. Devastating, heart wrenching stories; intervention-encouraging stories that otherwise wouldn’t have come to such light if it weren’t for social media.

Bloomberg and New York Times deemed O'Brien “food's Erin Brockovich". The heart-shattering story of her late son, chronicled here, tossed her into the limelight of this allergy-ridden world we live in. And she’s seemingly never looked back.

So what’s happening with EpiPens now? What has ‘the battlefield that is social media’, as Mashable so cleverly called it, and its Mylan-crusaders gotten us? Mylan caved, to an extent, after the intense backlash from social media found its way to the company's higher-ups. There will be a cheaper, generic version of the drug available at 50% of the original cost reported earlier in August (roughly $300). Though we still have a ways to go with making the drug genuinely affordable—not to mention: why a generic version? What's the catch? That's still largely to be determined, but it's never been clearer that there is no other option than for this issue to be resolved. Lives are at stake, and we have the strength of social media largely to thank for pushing all of this forward. Even Presidential candidate Hillary Clinton took to Twitter in August to let her 8.87 million followers know: “EpiPens can be the difference between life and death. There's no justification for these price hikes.” The tweet got 10,110 likes and 4,038 retweets (and counting). I thank the people spearheading this cause, the Internet at large, and social media in particular for helping this potentially life-saving change be made. With so much at our fingertips—in fact, right in front of me as I type this—we simply cannot stand idly by.