When it comes to digital, it’s all about the perfect mix of mastering the classics and staying hip to the trends. Meanwhile, when it comes to the Internet, the best way to stay relevant and be noticed is to stay up to date the ‘next big thing’. As for social media: that ‘next big thing’ is video. Videos are the most shared medium on social platforms.  is adding a more personal, real, and even live touch to social platforms. There’s something more engaging about video than other mediums. There are three social sites, specifically, that are on the video frontier and staying relevant, keeping old users and attracting new—Snapchat, Instagram, and Facebook.

A Brief History of Social Media

Social media does a great job of changing technology. Back in the 1990s, computers became a common object in the home. And with computers came the Internet and chat (AOL, MSN, etc.). Bring on the early 2000s which brought about social sites such as MySpace and the college exclusive Facebook, which both still focused more on the text chatting aspect of connecting, music streaming, and a couple photos here and there. The use of webcams was also popular, however, it was still more on a social level. Jump to the mid-2000s, and Facebook becomes inclusive to everyone with an e-mail address, and a little thing called Twitter has just been created (early users are trying to figure out how it can be used). Suddenly, in the 2010s, social becomes heavily focused on images and social sites such as Instagram and Snapchat come into existence. Myspace, who didn’t adapt to the ‘next big thing’, slowly faded into the Internet void, out of the minds of old and potentially new users alike.

Businesses on Social: The Personal Side of Branding & Beyond

With all the new inclusiveness, businesses started taking more advantage of social and saw it as a way to try to connect and relate with customers, as well as improve their customer service game, making it more personal. Businesses who were using social were connecting on a different level and standing out—they were going beyond promoting their brand and image; they were getting, as well as giving, real-time feedback and customer service. Now, with all the online businesses in the world, and really just the use of social media in general, standing out as a business isn’t as easy as it used to be. Having a social account for people to connect and contact you on is practically expected. It’s no longer about whether or not you need a social media account—it’s about how to stand out and be seen on social media and which platforms are most effective for your business. The social media sites that are staying relevant seem to be catering more and more to businesses with things such as ‘Business Accounts’ and ‘For Business’ options. These same sites are also adapting with increasing use of easy to use video. So how can a business using social media stay relevant, or better yet, stand out? Simple. By being forward-looking—have your sights set to the next big thing in social. And top social media sites have made clear what that is: for business. 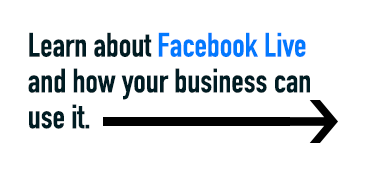