The Biggest Social Media Failure of 2016 Yet 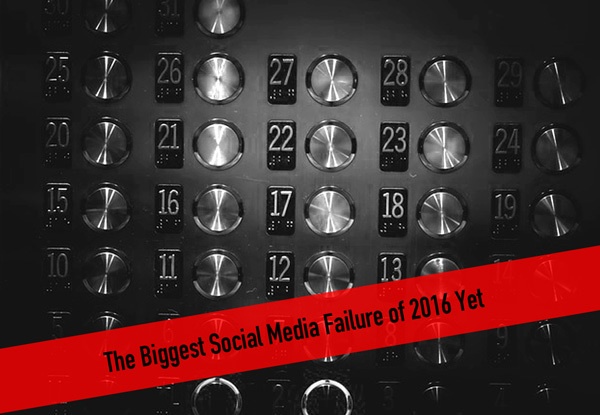 Over the years, there have been some terrible social media fails by some really, really big companies. Companies you would expect to have learned the social media game by now. As marketers, there is much to be learned not just from the viral successes everyone talks about, but from the epic failures too. So let’s get to work breaking down the most recent mistake that’s been lighting up social media.

Last week, Amtrak made a huge error on Twitter. And we mean huge. Amanda Carpenter, an American author, political advisor, speechwriter, CNN contributor, whose Twitter is authenticated, mind you—wrote to Amtrak on February 14th of this year. She tweeted, "Guys. I'm trapped in an Amtrak elevator at BWI airport. Help?" Carpenter boasts over 90,000 followers on Twitter. More likely than not thousands of her followers saw the original tweet, and noticed the fact that it wasn't responded to with haste and/or an apology. The CNN contributor also took a photo of the elevator's expired certificate of compliance, with the caption "Here is the notice showing inspection expiration for the elevator I was trapped inside. Thx Amtrak.” As bad as no response for an embarrassing incident is a ridiculous response.

It is a perfect example of a self-inflicted customer service failure. Why? It was at heart a dishonest reply. They should have said outright that her plea-tweet was brought to their attention from someone who re-tweeted it (which is allegedly what happened), but no, they answered her as though they were as on top of their game. Honesty is always the best policy, right? And so is apologizing when you are wrong—a genuine apology, and not just some corporate canned reply.

What Amtrak should have done in this instance was so simple: write to Carpenter and apologize. Apologize for not responding in the first place and for her inconvenience. They had the opportunity to show they cared and missed it. Clearly, their team was trying to cover up their mistake and the cover up blew up on them. They didn’t successfully slip the wool over Amanda’s audience. They did offer her a free Acela ride "for the inconvenience back in February," which was nice and all—but underwhelming.

To be totally fair, Amtrak did reach out to Carpenter 16 minutes after her original tweet. They let her know that BWI was aware of her situation, and on the way to help. And while that was better than nothing, the response they had last week was poorly considered and even more badly timed.

In a world of constant communication, we have to be aware of the persona we’re putting out into the world. Amtrak’s persona after this incident reads something like this: Unaware. And that is not so good. 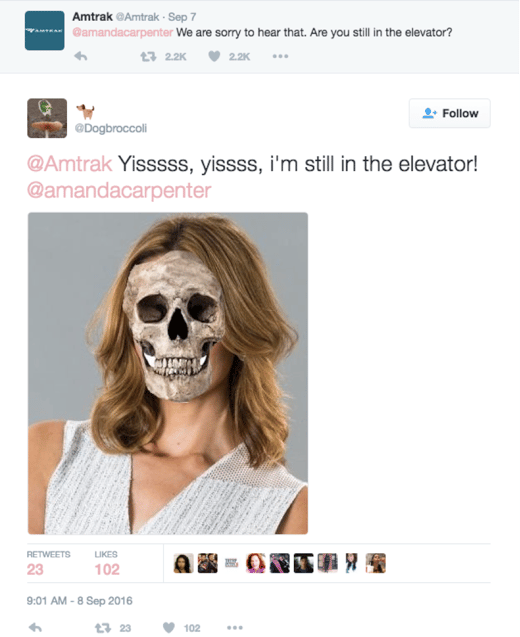 This hilarious, however admittedly morbid photo of Carpenter has been circulating Twitter of late, thanks to a user called @Dogbroccoli, and we're oh-so-happy it exists. At least we’re laughing, and hope Amtrak is able to get a giggle about this sometime in the future too… perhaps the not-too distant future, though.

Remember: everything that goes up on social lives forever. It's in real time, and even if you're quick to delete, there's no being sure that someone out there hasn't already screen-shotted it. Think Amtrak has learned their lesson? We certainly did. 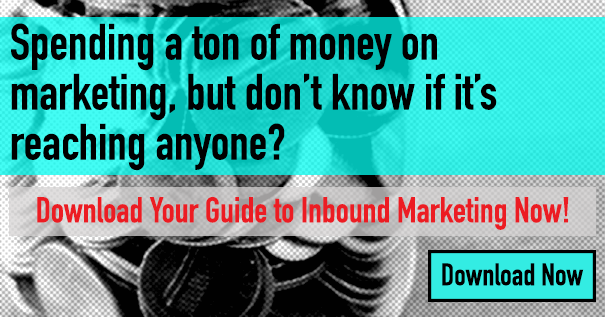