Proper Ways to Use Emojis 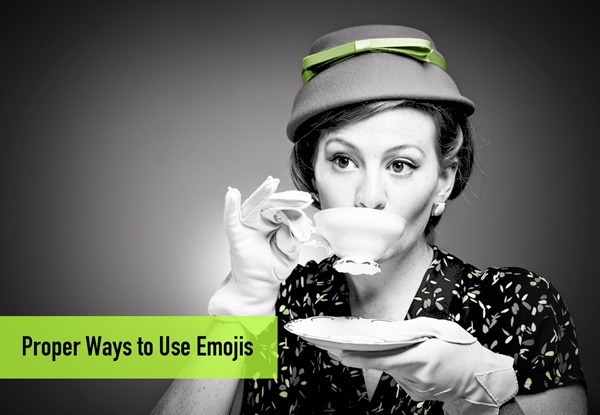 As mentioned in a previous article, emojis are more than just a trend—they’re a way to communicate. If you haven’t already, there’s no better time than now to start incorporating emojis into your social strategy. Whether you’re a popular fashion brand, an influencer, a popular food chain, a car brand, a local business, POTUS, or a regular ‘ol Joe just out and about in the social media world, there’s an emoji to be used. However, there’s more to using emojis than one might think—adding 5 emojis to the end of a tweet just because you think people will like them isn’t necessarily the best approach. Below are a few tips to put you on the path to successful emoji use:

There’s a reason the emojipedia exists (yes, it’s a real thing)—and you should use it. The funny thing about emojis is that they all appear slightly different when using an iPhone versus an Android, or when posting to Twitter or Facebook. Then there’s the obvious reason of people interpreting things differently. An example might be someone sending the face with ‘tears of joy’ emoji from their iPhone and their friend, an Android user, interpreting it as a crying face and being confused. To avoid the confusion and optimize your proper usage, learn the proper names by consulting the emojipedia.

The girl with her hand out commonly used when typing something that's sassy or saying ‘whatever’ is actually an information desk person.

To remain consistent across your brand, you should decide beforehand how many emojis will accompany each post on your various social sites, as well as what emojis are off limits… and when I say off limits, I don’t necessarily mean emojis with attitude—as aforementioned, some emojis appear differently on different platforms. Just something to take into consideration. Writing these guidelines will make your emoji decisions easier. Examples of this in action might be choosing to not put more than 3 emojis within a Twitter post; if you’re a company that sells flowers, you might only want the rose emoji used when you type your company’s name. You might (wisely) decide that no one is ever allowed to use the middle finger emoji. Or you might say you can only use the tropical fish emoji when using one of the fish emojis because the blowfish shows up funny on Facebook.

Emojis, in general, are fun! They’re colorful, more eye-catching than text, and people relate to them. A tip to stand out from the emoji crowd might be to turn your emoji use into a game. It appears people like using, interacting with, and deciphering emojis. As discussed in our article on emoji marketing, the White House used emojis in an infographic they released, which let people read the sentence and fill in the missing words by interpreting the emojis, Dominos has the option to order pizza by tweeting the pizza emoji to @dominos. Miracle-Grow released a first-of-its-kind Springmoji Garden wherein you could tweet them a garden emoji of your choice with a special hashtag (#) and it would appear in the online garden. And Chevy has a special message for you if you can decode their emojis, encouraging users to message them if they think they’ve figured it out. Get creative and find an engaging way to use emojis with your brand!

Emojis aren’t going away anytime soon, and keeping these 3 tips in mind as you start to incorporate emojis into your marketing scheme will put you on the path to becoming an emoji marketing master.