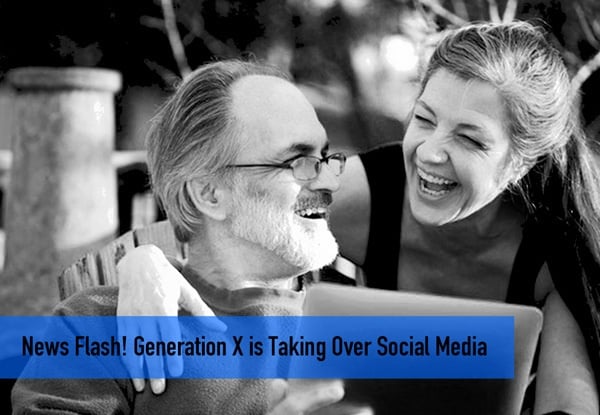 The typical understanding of social media goes a little something like this: a millennial created it, and now, millennials use it. End of story. And while that may have been the case when things first started getting ramped up in the world of social over a decade ago, it is no longer true. In fact, multiple recent reports have proved that Generation X—i.e. the Baby Boomers—spend more time on social media than any other age group. Yup, you read that right. Mom, Dad, and maybe even good ‘ol Grandma and Grandpa are actually the ones using up all that data on your precious phone plan! So what's the deal? Has it always been this way, but we've just been looking over our older counterparts and their rampant social abilities? Let’s discuss.

We wrote an article last week about the Women's March on Washington. And unless you've been living under a rock for the past few months—no matter your age—you know a little something about it. Anyways… in that piece, we talked about the person who started it all. And guess what? Consistent with those recent findings on Generation X, we can thank none other than a grandmother from Hawaii who took to Facebook to express what she and many others were feeling regarding the results of the November election. She suggested there should be some sort of protest—a march, perhaps. And on it went. All from a little Facebook banter by a 50 something year old.

Towards the end of last year, Bloomberg reported that the highest media consumption overall, social or otherwise was highest amongst 35 to 49 year olds. "The trend," the piece explains, "extended to overall media consumption by Generation X, whose members spend almost 32 hours a week, on average, on all media, compared to about 27 hours for millennials and closer to 20 hours for respondents 50 and older.” So while those in the half-century club are on the lower end of the media-consumption spectrum—clocking in a mere 7 hours a week less than millennials—they’re really not far off.

So what does this say about social media use at large today? Well, without a doubt, it says something about how, quite simply, social has begun to take over as a legitimate news source not only for twenty-somethings, but for Gen. X, too. The notion alone that a grandmother took to Facebook to share her discontents on the election says something—one: that she is versed enough in the world of social to know that that’s somewhat of a standard practice, and two: that her following—in all likelihood people roughly the same age as her—were doing just the same.

While it’s quite impressive that the majority of Americans say they get their news from social media, that’s not even the crazy part. A whopping 62% of Americans get their news on social—with the 49-65+ age range accounting for more than half of that statistic. Social media is no longer a young person’s game, and the numbers prove it. Perhaps its their voracious need to know what’s going on in the world that makes Generation X so social online—but then again, we’ve all seen a mom or dad, maybe even our own, post a hilarious cat video on their Facebook wall. So maybe it’s just that they’re finally getting the hang of it? Let us know your thoughts on this (millennials, Generation X, and anything in between!) and we’ll keep you updated.