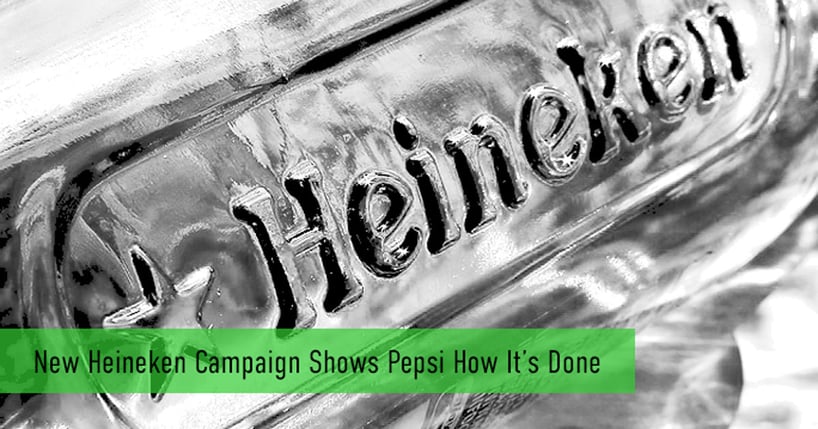 In Heineken's four minute and twenty five second #OpenYourWorld campaign ad video, they take everything Pepsi did and turn it on its head. Before we get too deep, and if you’re not sure what we’re talking about when we mention Pepsi, let's rewind a bit. A few weeks ago, we wrote a blog about Pepsi's absolute crash and burn of an ad, starring Kendall Jenner and a whole slew of critically indecorous notions. To quote our own blog:

"… the ad [was] (trying) to make a point that Pepsi changes people! It makes us feel at ease, relaxed… unified. But it doesn’t. And through this ad, it’s done absolutely anything but that. It’s gotten us up in arms, and super, super pissed that a team of marketing professionals would come up with this, and then actually run it. Social media mavens and just generally annoyed, disappointed people alike have accused Pepsi of “appropriating imagery from serious protests to sell its product, while minimizing the danger protesters encounter and the frustration they feel.”

In retaliation, and to show that they know exactly what they're doing, Heineken made a politically charged ad that, quite simply, rocks, and absolutely hits the nail on the proverbial head. Let's take a look at what they did that Pepsi didn't, and why, even in the highly critical eyes of marketing professionals like us, it works.

The spot by Heineken has begun to be hailed as the antidote to Pepsi's Kendall Jenner piece from a few weeks back. A political disaster with an out of touch message, Pepsi's ad struck all the wrong chords. It forced a disaster of a political message (Joe Ann Reid, author of We Are The Change We Seek tweeted: “Inside the Pepsi ad pitch meeting: ‘... and then Kendall Jenner solves oppression by handing an attractive policeman a Pepsi...’”). Yup. Pretty much. This Heineken ad, however, features a social experiment with three pairs of UK citizens, each with highly opposing beliefs. The ad opens with them giving the camera their opinion on one or more politically touchy subjects (mind you, none of the participants know about each others’ backgrounds, or what they’ve said in the opening scene). They're then asked to perform a series of team-building exercises. Enter a voice over a loudspeaker, which tells them to stand and watch a video of their partner confessing those aforementioned political beliefs to the camera. They're then asked to decide, with this information in hand, whether or not they'd like to stay and have a beer with their partner to discuss their differences. Every one decides to stay.

The commercial stands to prove that human beings, while judgmental creatures, can reconcile differences. Because no one knew anything about their partner from the get-go—no one had any pre-conceived notions—they went in blind, and happily. The ad doesn't force them to stay and have a drink. It also doesn't force those of us watching to form any opinions, à la the Pepsi ad, which had people scrunching their noses and huffing in disgust right off the bat, simply for employing the likes of Kendall Jenner to star the spot. Rather, it succeeds by doing a few simple things: it doesn't skirt around the hot, hard topics of our time. It tackles transgender-phobia, sexism, and climate-change deniers, among others things. It is honest. The look in the man's face when he realizes the transgender person standing next to him had to hear him speak ill towards her community—towards the hurt she's experienced in her life--is anything but forced. It's real. Human. Convincing in a way that doesn't need to be pushed. Meanwhile, the Pepsi ad, which we could clearly go on about for ages... was tone-deaf and ignorant. The call for "world peace" that Jenner effectively issues during the ad by handing a riot-police officer a Pepsi is heinous, and flies in the face of everything we know actually happens during instances like that.

Heineken pulled out all the right stops in this simple, brand-positive ad. They connected to their viewers and brought out the best in the human beings they had be a part of their piece (human beings that could easily be you, us, or somebody the average person knows). A comment from a YouTube user really says it all: "You can stay and talk about your differences over a beer, or you can leave and get a Pepsi on your way out. The choice is yours." How's that for honest?