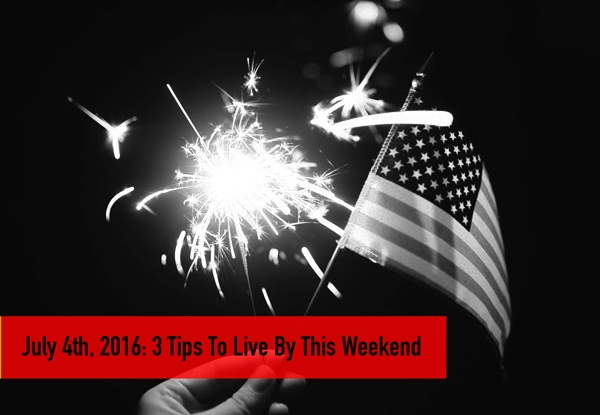 This year, July 4th falls on a Monday… you know what that means: long weekend! And if your boss is especially nice, it means a really long weekend beginning on Friday. We're all excited to celebrate America's birthday, sure, but in the midst of the excitement, we often forget how to best plan the weekend. So let’s get you to that BBQ on time, shall we?

Here are three tips to follow in order to make your July 4th holiday just a little bit easier, and a whole lot more enjoyable.

Like we said before, maybe you’re lucky and you’ve been given Friday off already. In that case—you rule, and so does your boss. But if you’re a little less fortunate, either take Friday off entirely, or come into the office early and leave early. Traffic during the days leading up to this holiday (especially for those who live or are traveling to a destination somewhere within a stone’s throw of the beach… read: everyone) is usually heaviest around two o'clock. This means that in order to reach your destination on time, and without pulling out your hair, leaving work around noon is probably your best bet.

If you’re not sure whether or not purchasing and setting off fireworks in your state is legal, head over to this link (you really want to find that out before ruining the weekend for yourself and whomever happens to be at your self-produced show!) Not many states—including those up here in our Northeastern corner—allow personal use of large explosives. So read up before setting off those pretty little explosives. Talk about a surefire way to ruin the weekend…

Not to harp on it… but, well, we’re going to. The cheap gas prices around America right now are making for a heck of a July 4th traffic build up. According to AAA, roughly 43 million Americans are likely to be on the roads between June 30th and July 4th... that’s a whopping 1.3% increase from this weekend last year. Siting in hours of traffic is one way to leave a sour taste in your mouth from the weekend that we’d really like to avoid. Step into the ring prepared: so you don’t get stuck, wherever you are, before everyone else does! You won’t be seen as a party pooper… not when you’re happily in bed by 9 pm! As an added bonus, you’ll look like a superstar headed into work on Tuesday morning, bright-eyed and bushy-tailed as ever.

Check out Waze’s live traffic map in order to help you get home faster, too. Avoiding all those post-fireworks traffic backups will be key.

Hopefully by following these tips you’ll avoid some of the annoyances that come with celebrating America’s birthday. We can’t help it, and we know you can’t either—she’s so worth celebrating. Be safe this weekend—enjoy your hot dogs and hamburgers, and don’t forget to apply sunscreen!