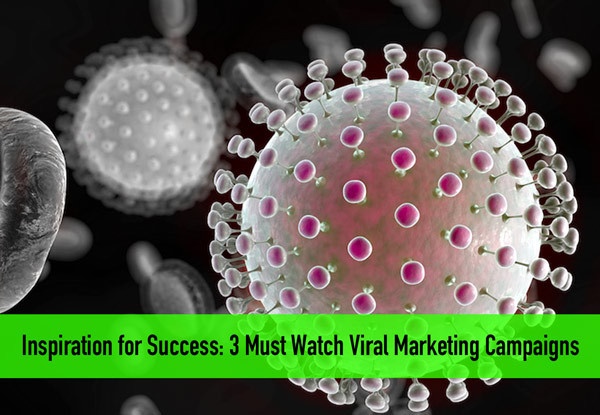 It can be very difficult to motivate oneself when working in the marketing world. Day in, day out, it seems like people's videos, tweets, and the like go more viral than anything we could ever possibly create. Well, we're here to tell you just how incorrect a notion that is. In fact, we've picked three of the most viral--not to mention effective--marketing campaigns we've ever seen. Fun fact? They’re all videos. Hmm, perhaps this should tell us something.

Here’s what makes this article worth it: while you’re watching, think about how the videos are implanting genius marketing into their viewers’ brain. Once you’ve watched all three videos, we think that you'll agree wholeheartedly: there was no way they weren’t going to be successful.

In order from most to least viral (if that latter can even be considered "least" in this case) here are our picks for 3 of the most effective, viral video marketing campaigns of all time.

Engaging. Emotional. Clever. Chipotle's viral video is centered on "Crow Foods Incorporated", set to the Willy Wonka song Pure Imagination, and is both educational and haunting. It's hard to look away... and we don't. At roughly the 1:40 mark, it's nearly impossible not to be fully ready to watch the rest of the video, though it’s nearly four minutes long (you'll just have to click and see what we're talking about to know for sure). In this dystopian world, cruel animal confinement, hormone injection, and a slew of other food industry plagues rear their ugly heads, alerting the public to what will ultimately show itself as the antithesis of Chipotle and their metaphorical Scarecrow’s ideals. The end of the video shows a sign, big and red with white lettering, just like Chipotle's emblem, with the words "Cultivate a Better World". And indeed, after watching this piece, it'd be hard not to try and do just that.

All it takes is one minute and 17 seconds of great music, a hardworking protagonist, and very high production value—and boom, you’ve got a little bit of genius on your hands. The average human, Reebok explains us in this brilliant piece, lives 25,915 days. We'll bet you didn't even think about shoes over the course of this video, and that's quite all right. Reebok is doing something much bigger than just showing us how a woman (or anyone) runs and experiences life—how she jumps and climbs and lives to the fullest. Instead, they show us, without making too grand or obtuse a gesture, how she's experienced fitness throughout life. And sure, there’s an element of ‘she’s done all of this with help from Reebok’ over the course of the video, but it's decidedly well done, and we don’t need anyone spelling things out for us to come to the appropriate conclusions; the piece allows its viewers to draw or deduce whatever feels most significant, which is hugely appealing. It's only in the beginning, when the woman is shown competing in a Reebok sponsored event, and at the end, when the video shows the Reebok sign and the words "Be More Human," that we really think: ah, yes, Reebok—and: yup, this is great.

Though the video has only been up on YouTube for four months, it has garnered almost one million views. We’re excited to see what happens when it resurfaces, as most all good things do, and what kind of storm it takes the Internet by then. Click on the link above to check out the video, and calculate how many days left you have to Honor Your Body.

While not necessarily our favorite of the bunch, Fireman Saves Kitten can certainly be considered the most successful. With over 32 MILLION views, its not even close to the type of content they usually put out, but it's about as effective as anything we've ever seen. Plain and simple, this video chronicles a firefighter saving a kitten from a fire—yup, you read that right, and it's as cute and epic as you're imagining. For this video, GoPro went against their own grain, pushing the envelope just a tad further than perhaps any of us have had the guts to do. It’s not what we’re used to seeing from them—surfing or snowboarding footage by the best of the best in the most beautiful of locations—this video, much like those feats of athletic heroism they've illustrated so beautifully for us before, acts as its very own breed of heroism (no pun intended!). By widening their campaign horizons, GoPro also widened its audience—ah, perhaps that’s how one acquires 32 million views on a 2-minute video…

And there you have it: our picks for the most effective and viral video marketing campaigns out there. There are thousands of other extremely successful video campaigns, but listing all of them would’ve been crazy (and would have added up to an insane amount of footage!) But, if you’re looking for a little more inspiration from another absolutely stellar example of great video marketing, check out this video. It was viewed almost 62.5 million times, so we’ll let you decide whether or not it “worked”: Always’s Brand’s #LikeAGirl. "Why can't ‘run like a girl’ also mean ‘win the race?’" Watch and find out.