How to Write a Great Blog Post in Under an Hour 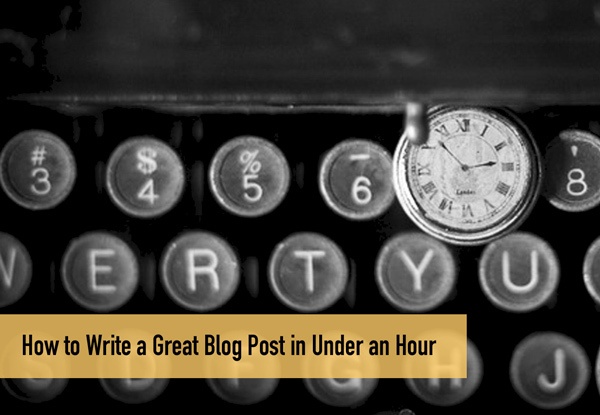 Time. None of us have enough of it—but hey, there's 24 hours in a day, and as the saying goes: Beyoncé's day has the same number of hours in the day as yours, so... When it comes to writing for work, things can get monotonous, boring, even repetitive if you're not careful. When you learn how to cut down on the amount of time it takes to write a blog, you’re suddenly presented with a whole slew of potential pieces you now magically have time to write! So let’s talk about writing blogs efficiently—more specifically, in under an hour.

Writing first and editing later is a writer’s bread and butter. If you stop to edit, things get convoluted quicker than you can imagine, and ultimately, you lose your train of thought, effectively bringing you back to square one. Be ready to re-start the creative process all over again… talk about a time waster. For those of you who are Type-A, this might sound like one of the hardest things you’ll do today, but just write now, edit later: trust us, it works. A stream of consciousness piece that has a steady eye look it over later is much better than a constantly stopped and started one. You’ll see.

What are you linking to within your post? Most legitimate blogs, especially inbound or outbound marketing ones, will include relevant links to various other respectable, quality websites that stand to reinforce their point. Again, though, finding these sites with the appropriate stats or quotes can be time consuming, not to mention have the capacity to really mess you up when you're on a roll writing a stellar blog. Having a few consistently dependable sources bookmarked on your browser will make for a much quicker blog creation process, and, as an added bonus, you won’t pull your hair out combing through the depths of Google for an authentic website or two. It’s a win-win.

This might sound contradictory to the idea of a stream of consciousness piece of writing, but really, it’s not. If you plan what you’re going to write before hand, you’ve already mapped out your main points—what you want to say. How you want to say them, though, that’s where the ‘write first, edit later, stream of consciousness’ idea comes in. With a plan set into place, you’ve already done about half of the work. That’ll take only a few minutes—you’d be surprised—and for how helpful it is, it’s totally worth it. And besides, focused content with a few key points that have clear intention makes for an undeniably more interesting read for your site visitors, and you’ll have them coming back again and again.

Above all, writing interesting, effective, overall great blog posts is what’s important, regardless of how long it takes to do so. That said, if it takes you more than an hour, so be it. That’s often the case with us, to be totally honest—why? Because we care about the content we put out into the world, and as good as we’ve gotten at writing efficiently, sometimes a post requires a little more attention. But when we’re strapped for time, or strapped for blogs, this ‘Under and Hour’ practice is a good reminder that sometimes, following a particular process can be really helpful.

We hope this helps you get writing. Don’t’ worry about setting a timer or anything, this is just another way to get you going. Good luck!