How to Avoid Marketing Waste

The world of marketing is ripe with waste. It is the one department that CFOs and CEOs allow to function, often times, with little tangible results—or worse, getting good results without a deep understanding of what is working and why. Decent results actually increase the waste factor in marketing. Because much of the marketing of a company goes unmeasured and not linked to a specific ROI, if the aggregate results are decent, then there is rarely a deep dissection of the marketing to determine what is working. Direct mail, catalogs, trade shows, and newspaper and magazine advertisements are repeated for months or even years with no valid proof they are even paying for themselves. Small to mid-sized businesses routinely spend tens of thousands of dollars on marketing while attributing sales success to the program without it ever being measured.

For instance, a company may send out three or four different direct mail advertisements simultaneously. If hypothetically the combined campaigns increase lead flow by 3 percent the program is a success. But what if one of the campaigns actually failed? Wouldn’t it be more efficient to know the results of each campaign? The poor performing campaign could be improved or eliminated and the marketing budget reinvested in the campaigns that are working. The key is to precisely track the response rates of each program separately. One method would be to run each program in sequence and allow for results to be tallied against each other over a period time.

A better way to track marketing spend is to isolate the response of each piece of advertising and link it to generated leads and ultimately new sales. One of the easiest ways to conduct the test is using the “call through” method. Working similarly to how Google Ad Words ™ works where individual “click-throughs” are tracked to a specific landing page and then to an order form, “call-throughs” are tracked by assigning a unique phone number to every single advertisement that is sent out. The phone number acts like a license plate number that can be traced back to the make and model of an individual car, but in this case, an individual piece of advertising. 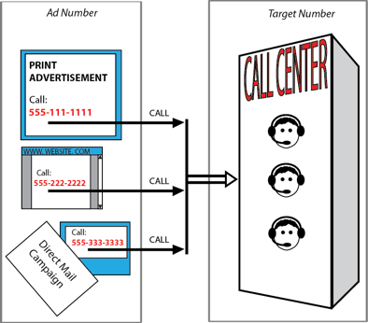 People like to do business locally. If thoughtfully planned and executed, each advertised number will be local to the potential customer even if the target number it is pinned to is long distance. Local numbers increase response rates. During a radio campaign, a local number will often outperform an 800 number.

For example, imagine a New York company that wants to break into the California market. It might choose a group of numbers clustered around major metropolitan areas such as Los Angeles, San Francisco, and Sacramento. The numbers are local California numbers, but when customers call them they ring into New York or wherever the call center is located.

The magic of this system is that tracking the results of each call becomes simple. Each call is linked to the campaign with the phone number that was published on it. Most of the major CRM systems on the market allow easy phone system integration and these inbound call logs can be populated directly into the system.

At the end of the reporting period, a week or a month, real business intelligence is available. Shifting back to our original four advertisements, the data may tell me that although we had an overall 3 percent response rate, maybe ad number two did not perform well and had a .05 percent response rate with the success of the other ads carrying the majority of the success. A smart manager will then be able to discontinue or revise the underperforming advertisement.