Hold The Door: Game of Thrones Throws on the Waterworks 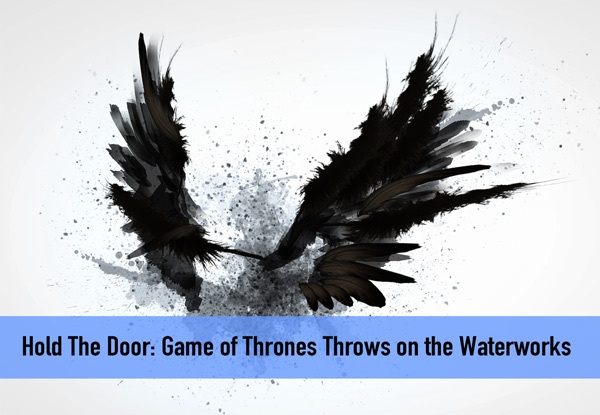 Per usual, we'll start by saying this: DO NOT CONTINUE TO READ UNLESS YOU'VE WATCHED THE MOST RECENT EPISODE OF GAME OF THRONES! This article contains many, many spoilers.

In our last piece on Game of Thrones, we brought you a couple of different theories about the character of Hodor—who he was, why he became the man we’ve learned to love, etc. The theory we, and most GoT fans, placed their bets on was this: Hodor warged (took the bodily form of another) into Lyanna Stark's horse, which was then killed. This would explain why he’s so comfortable carrying around Bran, etc. Seems simple enough—and conceivable enough, too. But then last week's episode happened, and it turned all of our theories upside down.

The conclusion of season 6, episode 5 showed a young Hodor, then Wylis, convulsing on the ground where we last saw him standing, yelling: hold the door, hold the door! In the present day—or, season 6 episode 5—Hodor wedges himself against a door, thus keeping back a throng of White Walkers from devouring Bran, who cannot be encouraged out of his warg-state. The director of this episode really went all out for this one, toggling back and forth from the present to the past, depicting the young Wylis as he was becoming Hodor (the man’s name, the viewer quickly realizes, stems from the boy yelling “hold-the-door” over and over, in a sort of slurred together version of the phrase).

And to make matters worse, if you’ve watched GoT from the beginning, you know that what appears to be Hodor's ultimate end (well, we can't be absolutely positive of that... especially not after the Jon Snow debacle…), is really the fault of Bran; it's his fault that Wylis had a vision of a young man of himself as Hodor. It is due entirely to Bran’s warging powers that he could influence the past. It’s all a lot to digest plot-wise, and perhaps even more so emotionally. Ultimately, Wylis’ life only really had one greater purpose: to hold the door—Hodor—saving Bran and Meera, and thwarting the plans of Night’s King.

The death of Hodor/Wylis (are you still with me?) while an absolute tearjerker, was also epic. It literally shattered all of what we believed to be well thought out theories explaining the background of this fascinating, however admittedly minor character, and it crushed any one’s ideas about Hodor as an ignorant lug, good only as a vehicle for Bran. Rather, after all this time, we come to find that Hodor is the unequivocal hero of this season—and for some of us, the hero of the show thus far.

A number of other fan theories surrounding Hodor’s cohorts found their way onto the Internet on Sunday night after all of this went down. For instance, many are wondering if Bran has been using his visions to “time travel” as the Three-Eyed Raven, all in an attempt to shape the events of the past, e.g. the demise of Hodor. Some pretty encouraging evidence has been brought to light to back this up—like the fact that the Three-Eyed Raven’s name is Brynden, which is not so far off from Brandon, and the almost too-obvious fact that the Three-Eyed Raven chose Bran for all of this. We’re not so sure that Bran has had the power to control the fate of the Seven Kingdoms for the past six seasons. But hey, with all the crazy that’s gone down over the course of the last five episodes—not to mention the dozens before them—it’s anyone’s guess what’ll happen next.

Have ideas of your own about Hodor, Bran, or any of the other dozens of plot lines occurring in Game of Thrones right now? Share with us! This GoT obsessed Connecticut Inbound marketing agency feels there's a lot to be learned from the phenomena that is Game of Thrones. We’re already planning our next GoT post, which will be about the coming episodes, as well as what we think about the marketing scheme behind this powerhouse of a television show—more on Hodor the hero, and Bran—the victim?