Defending Instagram's New Logo, and The Relationship Between Branding and Graphic Design 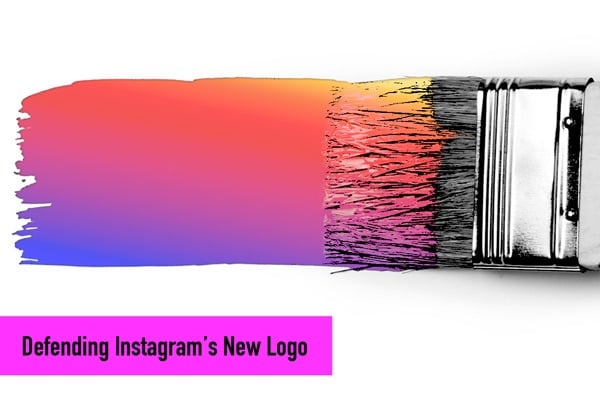 As with any new logo debut, there will always be a slew of responses. It’s one thing when a little under the radar company changes it’s logo a couple times before finding the right fit, but when a popular company with an iconic logo does it…it really stirs up the online opinion pot. And, as is true of life at large, it is to be expected that not everyone will share the same opinion.

Because essentially the entire world is online, one of the most important things when releasing a new logo design is to be transparent about the reasoning behind said design. A number of reasons can sometimes seem like a bunch of B.S., but Instagram’s head of design, Ian Spalter’s main reason for the design makes a lot of sense when you think about it. “When Instagram was founded,” he told us after the new design’s release, “it was a place to easily edit and share photos. Five years later, things have evolved. Instagram is now a diverse community of interests where people are sharing more photos and videos than ever before; using new tools like Boomerang and Layout, and connecting in new ways through Explore.” He goes on to explain what he wanted to represent from this evolution: “We wanted to create a look that would represent the community’s full range of expression — past, present, and future.”

This explanation goes beyond simply changing something for the sake of changing it or modernizing it for the sake of modernizing it (e.g. Verizon’s new logo1). Tim Nudd of AdWeek said that he thinks this modernizing of the logo was a bad idea for design reasons, explaining, “Unfortunately, while it may render better in some environments, it's a very forgettable image that will get lost on people's phones amid the thousands of other similarly uninspired designs of most tech apps.” You make a good point, Tim, however, when thought about from the perspective of design reflecting a brand…Instagram has a point about its diverse audience—rather, its diverse AND modern audience. The Pew Research Center reports 55% of Instagram users in 2015 were between the ages of 18-29, while an annual statistic from Mary Meeker’s Internet Trends Report says that as of Spring 2015 Instagram was considered the most important social network by more American teens, at 32%, than any other social network. Instagram is used by many but appears to be most utilized by the young, or dare I say, modern.

As mentioned in a previous article of ours on the importance of studying different approaches to design, today’s world has a preferable acceptance of pluralism in design, yet it is still helpful and healthy to discuss the many different approaches that come with that pluralism. As far as Instagram’s approach goes: one big idea that Instagram’s new design reasoning supports and lays importance on is how graphic design and branding go hand in hand. So, not only did the Instagram get a new logo, their other supporting apps, Boomerang, Layout, and Hyperlapse, got fresh looks too—and boy do they match perfectly! One huge role graphic design plays in branding is to help with brand recognition…and to be honest, with the old logo, if Boomerang didn’t say it was by Instagram, I wouldn’t have drawn an immediate connection, especially if I wasn’t familiar with the Instagram logo initially (because the Boomerang, Layout, and Hyperlapse logos were all more modern).

Now, it’s worth mentioning that a company’s logo is not their brand, however, a logo that reflects the brand is fairly logical and beneficial. An article by BrightBlue C says it best: “In layman’s terms, a logo is like a mental shortcut to a product or company.” If this is the case, then we’re thinking Instagram changing their logo to something less specific, or more minimal, yet leaving certain distinctive elements (i.e the rainbow color concept, lens, and viewfinder) fits a modern, diverse audience.

One thing that can be readily agreed upon is the new UI/UX design for the app, is absolutely beautiful; it is simpler and unquestionably shifts the focus of the app to the photos being posted, in the best way possible. And to Tim’s comments, I have a feeling Instagram is such a significant part of the lives of the people who frequently use it we’re all going to still know exactly  where it is on our phones.

You still don’t have to love the new logo, but maybe this will at least help you broaden your reasoning-horizons when a company debuts it’s newest logo. In today’s marketing world, where many fields cross paths, there is so much more that goes into design than, well, just design.

1 Verizon’s new logo wasn’t nearly as justifiable because the change wasn’t as perfectly altered as the Instagram logo. As Ian Spalter stated about deciding on a glyph for Instagram, “The question then became, how far do we go? If you abstract too much, the glyph doesn’t feel tied to the history and soul of Instagram. If you make it too literal, it’s hard to justify changing from what we currently have.” The Verizon logo change could be argued it wasn’t changed enough to justify it beyond it just being ‘modernized’.