7 Tips to Awaken Your Creative Muse 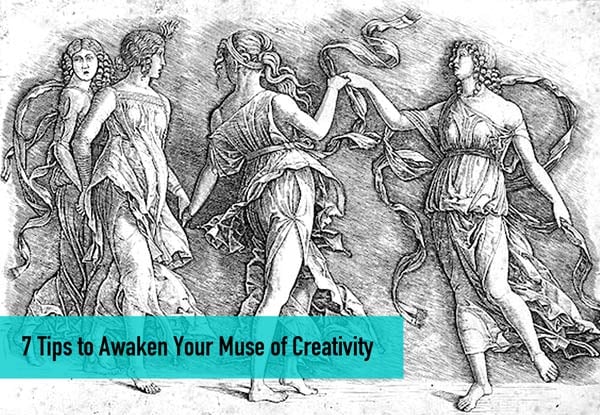 In ancient times, the Greeks believed that all inspiration for art and science was delivered to mankind via The Nine Muses. These Muses were the notoriously fickle daughters of Zeus who presided over creativity. They had to be enticed in order to deliver inspiration, or nothing new could be created.

In modern times, most creatives no longer believe in the Muses, but many successful artists, writers, composers, and scientists describe common phenomenon of ideas seemingly arriving fully shaped, as if from outside of themselves. In his memoir, On Writing, Stephen King describes how he often feels he is just a conduit through which characters reveal themselves, and he even claims to not know the ending to stories until they arrived. King was not alone. Mason Currey details many examples in Daily Rituals, How Artists Work of almost the exact same phenomenon across creative disciplines. It seems, almost, that this notion is more of a rule than it is an exception.

Thousands of years after the Muses reigned, science has helped us develop a clearer picture of what goes on in the mind when it is creating something new, or making a new connection to an old idea. Your mind is a complex biological computer, Scott Adams of Dilbert fame so eloquently describes as a “moist machine.” What we have learned about the mind is that by using it you strengthen and focus it. In other words, creativity is derived more from muscle than a muse. Much like lifting weights, where you become progressively stronger by lifting more weight, you become more creative through the effort of creation. The more you create, the more you CAN create. If you are a writer, write! If you are an artist, practice your art. How much is enough or too much? The sweet spot seems to be 1-4 hours a day. To my knowledge, there have been no credible scientific studies on optimal time spent to trigger peak creativity, but some clues can be found from those successful creatives who self reported what worked for them, as well as through my own experience as a creative and manager of other creative types.

For our purposes, I will focus on writers as it is where I have the majority of my experience, although there is reason to believe these tips will apply to any type of creative pursuit.

Creativity is as much a skill as it is a process. The more you practice it, the more success you will have with it. Never stop trying. Go out and make art!

Looking for a creative new way to your brand's story into words? Master the art of storytelling with a tool that's older than the invention of fire, Primal Storytelling™.