3 Tips to Making Introversion Work in Your Favor 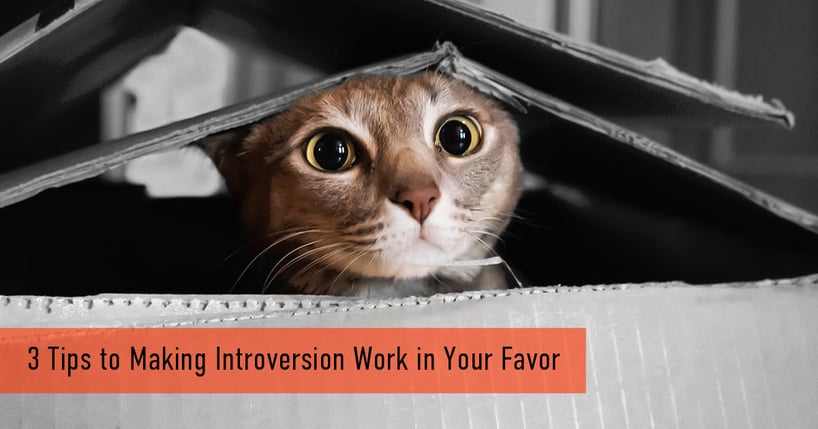 Introversion doesn't need to be something we look at or think about in a negative manner. In fact, sometimes, being an introvert in the Inbound Marketing world can actually be very lucrative. People who are inherently introverted have been known to be some of the very best and brightest thought-leaders of our time. From President Barack Obama to Mark Zuckerberg, there are dozens and dozens of famous, wildly successful world leaders of sorts who have called themselves introverts—and, of course, been deemed that by others as well. Here are 3 tips on how to be a powerhouse of an introvert even in a world of extroverts.

No one needs to know that you’re terrified to speak in front of a crowd. Don't panic. Panicking only gives you away to the people who want you to fail, and what's the point of that? Don't run away from your fears, it only encourages others to see you as that timid version of yourself that you know can often times be dispelled. Share what you know with confidence. Acting confident breeds that feeling in reality.

Communication is key in any relationship, and that goes for those of us in the marketing industry especially. Being an introvert doesn't need to be all about breaking out of one's shell. In fact, it doesn't need to be about that at all. But effective communication cannot be something that falls by the wayside because of introverted-tendencies. Again, look at all the incredibly successful introverts this world has seen thus far… they certainly weren’t content to sit quietly in the background while others changed the world.

The founder of Facebook—the worlds leading online social platform—has been called an introvert before. Ironic, no? Facebook COO Sheryl Sandberg told the New York Times that Zuckerberg is "shy and introverted and he often does not seem very warm to people who don’t know him, but he is warm." And no, it’s not the fact that Zuckerberg appears slightly standoffish that makes him a great creator. It's that he's a dedicated collaborator with a vision. He's genuine, and the people around him—employees and higher-ups alike—know this to be true by the way they interact.

If you're in introvert, you're probably not excited to have a public speaking engagement—you might not even be all too keen on speaking in front of your team for that matter. And hey, that's all right, truly. But what's not all right is being viewed as less business savvy, or less intelligent because you've let your nerves get to you. Bill Gates, the richest man this world has ever know, and the brilliant mind being Microsoft, knows that true value of solitude and deep focus.

"I think introverts can do quite well. If you’re clever you can learn to get the benefits of being an introvert, which might be, say, being willing to go off for a few days and think about a tough problem, read everything you can, push yourself very hard to think out on the edge of that area."

Practicing for what you know makes you uncomfortable, and for what brings out that slightly less confident side of you, is imperative. Thinking deeply, as opposed to on your feet when you might be more likely to make a mistake (again, not for lack of smarts, but more-so for lack of brute confidence) is key. Also, when it comes to public speaking… no one every said that notecards are illegal. If holding something in your hand, and having a few queues available when necessary makes you feel better, go for it.

Being an introvert doesn't have to be a bad thing. Columnist David Brooks once said about President Obama, "being led by [him] is like being trumpeted into battle by Miles Davis. He makes you want to sit down and discern.” What a compliment. Sometimes, sitting down and discerning is just about all any of us can do to solve a problem, so why not take that outlook and apply it to most of your life as an introvert? You don’t have to attract the most attention to be the most successful. In fact, as these tips and their exemplary counterparts show, perhaps that was never the name of the game to begin with.